"95 Days — 'Alubia de Tolosa', which translates from Spanish to "Beans of Tolosa," originates from the ancient town of Tolosa in the Basque province of Gipuzkoa, Spain. Tolosa is famous for its Saturday market and produce. It is reportedly the largest such market in the Basque Country and has been operating since 1256 AD.
'Alubia de Tolosa' is the most famous produce from the region. The beans are typically paired with chili peppers and are one of the main staples in Basque cuisine. The beans are such an integral part of Basque culture that they even have their own feast in mid-November called “Babarrunaren Astea” or “Week of the Bean.”
The plants grow to eight feet or more and produce abundant amounts of five to six inch pods that typically hold seven plump, dark black, quite beautiful, egg-shaped beans. Although grown and used as a dry bean, we couldn't wait and did enjoy them at the immature stage as green snap beans. This variety was sent to us by Gary Tuss who personally collected the seed while on a trip to the Basque Country." 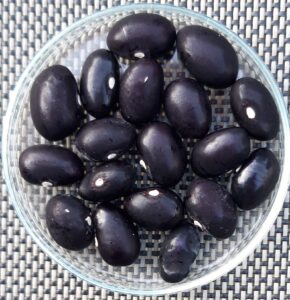